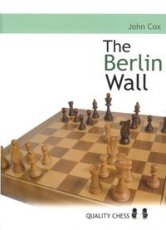 The variation that brought down Kasparov"

The Berlin variation of the Spanish is one of the most popular openings among world class players. After 1.e4 e5 2.Nf3 Nc6 3.Bb5 Nf6 Black can play a completely sound opening based mainly on understandingrather than memorizing theory. Many opening books make this claim, but the scarcity of forcing lines in the Berlin mean that in this case it is true. The trick is to gain the requisite understanding, and this is where John Cox’s eloquent prose comes into its own. After reading his explanations it will be clear why this robust opening has gained the nickname The Berlin Wall.· Expert guidance on one of the soundest openings· The opening that Kramnik used to dethrone Kasparov· A trustworthy opening that requires little memorization of theory.

John Cox is a lawyer and International Master from London. He is an experienced author whose previous books have received high praise.